Chavela Vargas is a Mexican singer of rancheras, which are traditionally sung by men about their desire for women. She dressed as a man, smoked cigars, drank heavily, carried a gun and was known for her characteristic red poncho. In a Colombian television interview in 2000, she declared that she was lesbian.

Vargas was born Isabel Vargas Lizano in Costa Rica on April 17, 1919. At only 14, she left the country because of its lack of opportunities for starting a musical career, seeking refuge in a more sophisticated Mexico. For many years she sang on the streets but in her thirties she became a professional singer.

Her first album was released in 1961 and, since then, she has recorded over eighty albums. She was partly retired in the late 1970s but came back in her full glory in 1991, thanks mostly to Pedro Almodovar, the notorious spanish film maker who rediscovered her and included her music in some of his films. She made her debut at Carnegie Hall in 2003 at the age of 83.

Vargas recently appeared in the 2002 Julie Taymor film Frida, singing “La Llorona”. Her classic “Paloma Negra” was also included in the soundtrack of the film. Vargas herself, as a young woman, allegedly had an affair with Frida Kahlo. 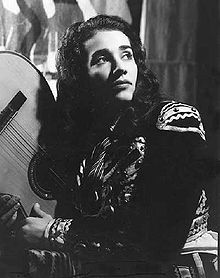