the plate of the poor … 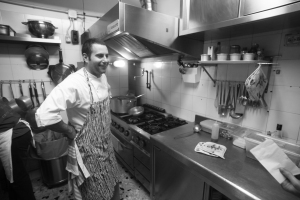 La panzanella: The plate of the poor …
La panzanella: the story
La Panzanella is a soup, mostly made during the summer, poor and humble, with a lot of taste.
The philosophy behind this recipe is that you can make it with simple ingredients, found almost anywhere (in the old days in Italy these ingredients could be found in any home, any field).
Since this plate is based on bread, preferably a little bit older, it allows you to recuperate the bread that you would otherwise throw out.
For all this reasons, this plate took its place in all of Tuscany in a fast way since the year 800 and became the typical plate of Italy!
La panzanella: the recipe
Ingredients
– Tuscan bread (=without salt)
– Wine vinegar
– Extra vergin oil
– Red tomatoes
– Red onions
– Cucumber
– Basil
– Salt
– Pepper
La panzanella: the preparation
You take a couple of slices of the Tuscan bread and put it into ‘fresh’ water (in the old recipes they wrote down to take fresh water of the well) along with some wine vinegar.
After a couple of minutes take out the bread, wrench it with your hands and put it into a large salad bowl.
Take the tomatoes, the red onions and the cucumber and cut it into pieces on top of the bread. Take the oil, salt and pepper (a lot, preferable fresh pepper from a spice mill) and mix everything together.
When everything is mixed together, you add some fresh leaves of basil, torn into smaller pieces by hand.
In the end, you put the salad bowl into the fridge and take it out only when you want to serve the dish: la panzanella needs to be served as cold as possible!
With this plate you should drink a nice cold bottle if white Grechetto wine.
Today the Italian story of the day is a little joke:
“Il Comizio e l’altezza”
“The Italian politician and his hight”
A politician finishes his political rally in his hometown near Naples.
Everybody knows him and they all laugh at him because he is a small, very small, guy. He was so small that when he was born, his mother took him out of the hospital in a shoebox!
When he starts his conversation on stage, the public starts making fun of him by talking and clapping, but the poor guy doesn’t realize why.
The more the politician hears everybody being enthusiastic and loud, supposidly about his discourse, the more he gets enthusiastic himself!
With a loud and decisive voice the politician shouts: “You, my fellow town members, that saw me being born and grown, …”
Suddenly someone from the public shouts: “Born, yes, but grown, not so much!!!!!!!!!”
50.863825 4.320560

Categorieën:food, inspiration, me, myself and I, my interests, Uncategorized