When I picked up this book at my favorite bookstore, I thought this was written by an undertaker, describing how she prepares corpses before they are coffined. However “The Gentle Art of Swedish Death Cleaning” by Margareta Magnusson is not at all about dead people. It is about people cleaning their houses at an elder age. Or – tout court – by anybody who wants to sort out her stuff. 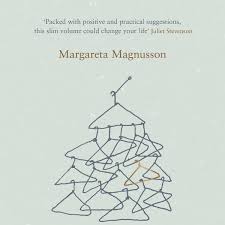 Margareta Magnusson being “between eighty and a hundred” is a graphic artist from Sweden who lived all over the world. In this memoir she is cleaning her apartment, sorting out what stuff she still wants to keep, what she wants to give away and what she wants to sell. Plenty of memories accompany this action. And she is experienced : she did it before when she moved from a house to a flat after her husband died. And occasionally she helped others sorting it out. “Death cleaning”, they call it in Sweden (*).

The places where I reside (Geneva, Brussels and many hotels) have plenty of room to store whatever I would want to keep. But over the last few years without realizing it I seem to have been death cleaning myself, keeping only what is really dear to me.

When I met my partner, now twenty years ago, we lived separately. He in Ghent and I in Brussels. When after a year he moved in with me and later when we bought a house together now fifteen years ago, we merged our belongings. I had bought my furniture at Morres Wonen in Hulst. Filip had invested in a antiques. Until recently our home was this mix of the two. But today after some recent renovations, we now live in a house with furniture that ultimately we bought together, selling or giving away the original furniture.

For sure, there are also the personal belongings like books, papers, notes, clips, photos, … put the digital disruption made me move most of it to the cloud. I did away with hundred of mostly management books, and now keep only what is fiction and art.

I guess that from now on death cleaning is a permanent business.

(*) Döstädning, or the art of death cleaning, is a Swedish phenomenon by which the elderly and their families set their affairs in order. Whether it’s sorting the family heirlooms from the junk, downsizing to a smaller place, or setting up a system to help you stop misplacing your keys, death cleaning gives us the chance to make the later years of our lives as comfortable and stress-free as possible. Whatever you age, Swedish death cleaning can be used to help you declutter your life, and take stock of what’s important.

Categorieën:books, me, myself and I